After six days of hard hiking, we are hugely, immensely thankful to have finally dragged our weary bodies into Pie Town last night. In six and a bit days, we covered 130 miles, and the hiking changed from the sublime to the frankly bloody awful!

The first day and a half out of Doc Campbell’s was hard going, but utterly gorgeous. The trail follows the Gila River canyon, with towering cliffs on both sides along much of its length. It seemed like at every bend in the river, there was another spectacular view to photograph. As we splashed through the river again and again, small fish darted away from us at high speed through the cool water. Although the hiking between river crossings was hot and hard work, it was lovely to be able to dip our hats in the river and put them back on, with cooling trickles of water running down our faces and necks.

But all good things come to an end, and after two more days of hiking along the river, the trail finally rose up to climb past an earthen dam, and we were at Snow Lake, a rather desolate reservoir set in bare open grassland. After a short stretch on gravel road, we entered a small canyon where we camped for the night. The next morning just after dawn, we filled our water bottles at a cattle pond while coyote packs called to each other across the hills.

Then after a short stretch on a jeep track across rolling, grassy hills, we entered the grim world of gravel tracks. They went on and on for the rest of the day, mostly uphill, all baking hot and windy. We kept passing two other hikers, Carpenter and Creeper, as we each took breaks in the shade at different times, and it was good to have their company.

After 23 or so miles we finally got to Dutchman’s Spring, where we filled our water bottles again before camping. We expected our next water source to be about 4 miles further on, so only took enough water for that night and a little for the next morning.

However, the next morning, after hiking for 4 miles, we found that the spring we expected to refill our bottles at was completely dry. Not entirely unexpected, as we had heard that New Mexico had had a very dry year. So we checked our navigation app, and it looked like there was a murky pond where we could get water a few miles further on. When we got there however, it turned out to be a stinking, fly-infested, murky cattle pond. As a precaution, we each filtered about half a litre of the stuff, but as the app showed a better water source just a couple of miles further on, we didn’t fill our bottles.

So we walked on, but when we reached the waypoint where we expected the next water source to be, we realised that it was actually about 2 miles off the trail, down a steep hill! So now we had a choice – a 4 mile round trip to fetch water or plough on for 14 miles with what we had, to our intended destination, Aragon Well. We reckoned we could just about make it, so on we went.

Needless to say, the day turned into a miserable, thirsty slog. Although much of the route was on pleasant small paths winding round wooded hills, it was just background to a raging thirst, soon joined by hunger as we didn’t have the saliva to eat anything. A mile before Aragon Well we came across some bottles of water under a bush, kindly stashed by a “trail angel” (person who supports hikers), so we took a half litre each to start sipping at as we walked, before finally getting to the well and filtering, treating and drinking as much water as we had capacity for.

The next day, we had a 24 mile gap before the next water source. We loaded up our maximum carrying capacity of 4.6 litres of water each, and set off on a series of rough stony tracks which took us over 9000 foot Mangas Peak. We reached our next water source about 9am the next day; it was then a 16 mile shadeless slog on dirt roads to Pie Town. Filthy, tired, footsore, thirsty and hungry, it was amazing to arrive at Nita’s Toaster House, a hiker hostel, and get cleaned up, laundry done, and catch up with all the other hikers going through the same challenges.

Late update: looks like I have an infected blister on my little toe. In fact, I think my toe is one big purple blister. I can’t really walk on it, so we’ll be hanging out in Pie Town while I get some treatment, hoping to get back on trail before too long. 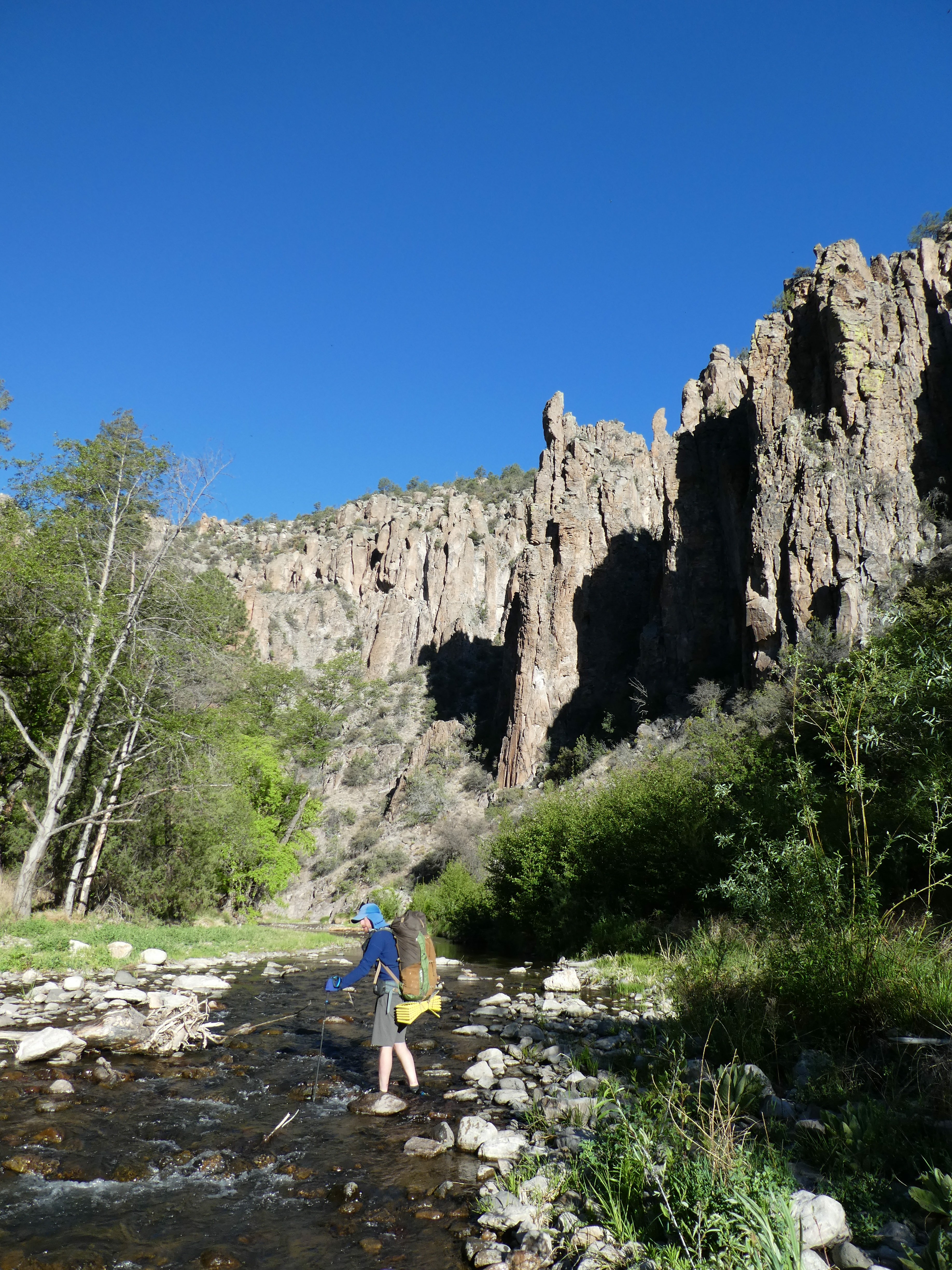